I once had a conversation with a pro-suburbanite about why I loved the city. Their response was common and concise, “I love living closer to nature too much to live in the city.” Actually, to say I “once” had this conversation is an under exaggeration. In fact, that is one of the most common justifications I hear in response to asking people why they chose to live in the suburbs.

The Paradox of Suburbia

On the surface, this statement actually seems quite valid. I lived in the suburbs and I felt much closer to nature when I was there than I do now in the city. Cities are our urban cores at the center of the surrounding suburbs and, naturally, the further out from the city you are, the more likely you will be closer to nature. So if you are a nature lover then you probably want to live in the suburbs, and if you are an urbanite, you probably want to live in the city, right? Well, not so fast. There is something paradoxical about this belief. Suburbia is actually the leading cause of environmental destruction in the United States. No other phenomenon has caused as many acres of forest to be destroyed here.

[quote]According to the U.S. Forest Service, approximately 12 million acres of southern forests will be lost to suburbia between 1992 and 2020. Another 19 million acres will be lost by 2040 unless there are changes in the pattern of development that now favors low density housing, strip malls, and exurban road construction.[/quote]So what is the paradox? The paradox is that if you are a nature lover then you SHOULD be against living in the suburbs, or at least aware of the facts behind your location choice.

View of the Surrounding Mountains from Downtown Portland

Surprisingly, only three states have recognized this paradox: Oregon, Washington and Tennessee. Only one—Oregon–has successfully done something about it. It’s called an urban growth boundary , a term unfamiliar to many, and it sets limits on suburban growth outside the city. My first trip to Portland showed me just how successful this tactic can be if implemented by the government and voted on by the people. In Portland, one of the most environmentally friendly cities, you look out from the center of the downtown not unto a sprawling suburban landscape but instead to a 360 degree panorama of magnificent green mountains. Here is a place where the nature lovers recognized that the best way to save the landscape they love so dearly is to live in the city.

Carbon Map with CO2 Emissions per Square Mile on the Left and Per Person on the Right.

Beyond the immense destruction of the environment that comes along with suburbia is another environmental problem – CO2 emissions. Automobiles are “the single greatest contributor to our total carbon footprint.” Because of this fact, global warming has been an issue for years. In response, environmentalists and automobile companies have been pushing hybrid and electric cars. But what is the true impact from switching to this type of vehicle? To find out we can look over at our European neighbors who always seem to be the first to push innovative new ideas. Sweden, who has the largest sales of “clean cars,” has actually seen a rise in greenhouse gas emissions.
[quote]What do you expect when you put people in cars they feel good about driving…? Naturally, they drive them more. So much more, in fact, that they obliterate energy gains made by increased fuel efficiency.[/quote]

Another response to the growing environmental problem has been LEED (Leadership in Energy & Environmental Design), an organization created to push green building design. As an architect myself, I have worked on a number of projects that are LEED certified and I am aware of its benefits. But LEED is not the solution to the problem; it is merely a standard for environmentally conscious architectural practices. A LEED platinum building (the highest certification of LEED) in the suburbs is still less environmentally friendly than a non-LEED building in the city. This fact holds true for suburban residences as well. If you know someone who is speaking the green talk and walking the green walk by driving a Prius, using energy efficient light bulbs and putting solar panels on their suburban home, make sure you tell them that “trading all of your incandescent light bulbs for energy savers conserves as much carbon per year as living in a walkable neighborhood does each week.”

Today, the world’s population is over 7 billion people. The United States population was 313.9 million in 2012. With the population rising exponentially, imagine what will happen to the earth if we continue to travel down the suburban road. The fact is that the earth simply does not have enough land or oil to support the suburban lifestyle. Just look at the rise in gas prices and airline ticket prices or oil budget cuts for municipalities and schools. We are spending so much money on oil in an attempt to support our sprawling lifestyle. Every minute, the United States sends $612,500 overseas to feed our automobile addiction. That’s $882,000,000 per day! Middle Eastern countries are reaping the profits of our American Dream. It’s time we wake from the dream and recognize the real problem. 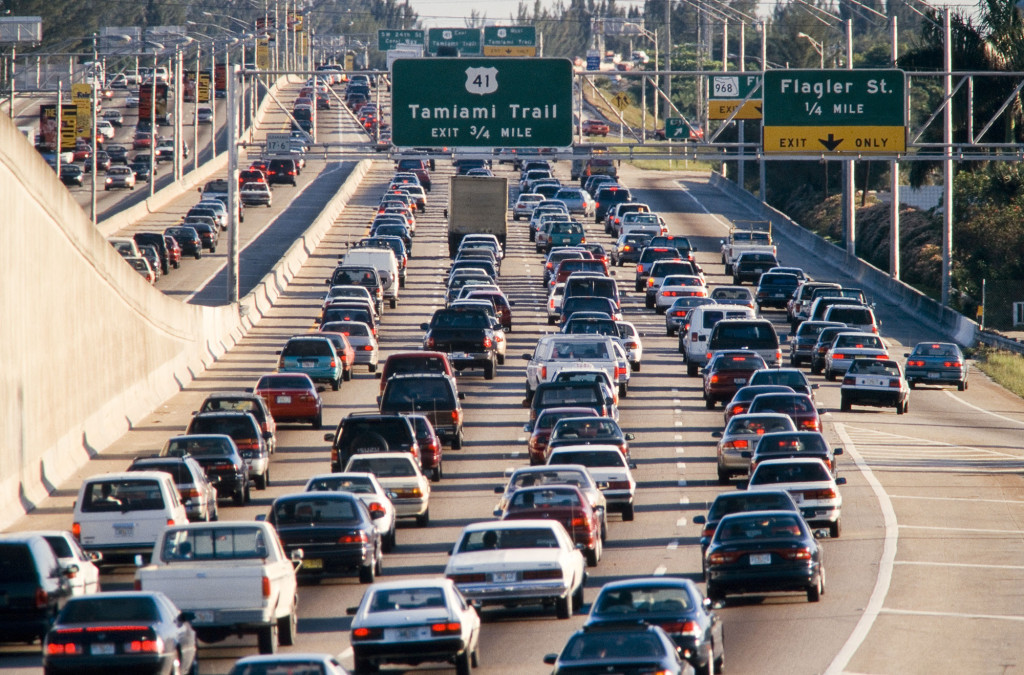 The Best Way to Avoid Traffic is to Live in an Area Where Alternative Transportation is Available.

Contrary to popular belief, the suburbs are not the most environmentally friendly place to live, nor are they a place for TRUE nature lovers. In an age of environmental consciousness where everyone is trying to reduce their carbon footprint through innovative technologies, hybrid cars, LEED buildings, etc., the best solution may be to return to the cities. I made the pilgrimage six years ago and I have felt healthier, happier and more environmentally conscious than I ever did before. In fact, I just recently took the next step in lowering my carbon footprint by selling my car. This is an endeavor that has also saved me $5,000 a year, a fact that will be included in the last blog in this three part series – Health, Environmental and Economic benefits of urban living.

Interested in reading the resources I’ve cited here? These are three great books with valuable insight into urbanism:

How Cities Work: Suburbs, Sprawl and the Roads Not Taken, Alex Marshall
$20 Per Gallon: How the Inevitable Rise in Gasoline Will Change Our Lives for the Better, Christopher Steiner
Walkable City: How Downtown Can Save America, One Step At A Time, Jeff Speck[/box]