What Would Jane Jacobs Think About Phoenix?
5378
post-template-default,single,single-post,postid-5378,single-format-standard,bridge-core-2.9.6,qode-page-transition-enabled,ajax_leftright,page_not_loaded,,qode-theme-ver-28.0,qode-theme-bridge,disabled_footer_bottom,qode_header_in_grid,wpb-js-composer js-comp-ver-6.7.0,vc_responsive

What Would Jane Jacobs Think About Phoenix? 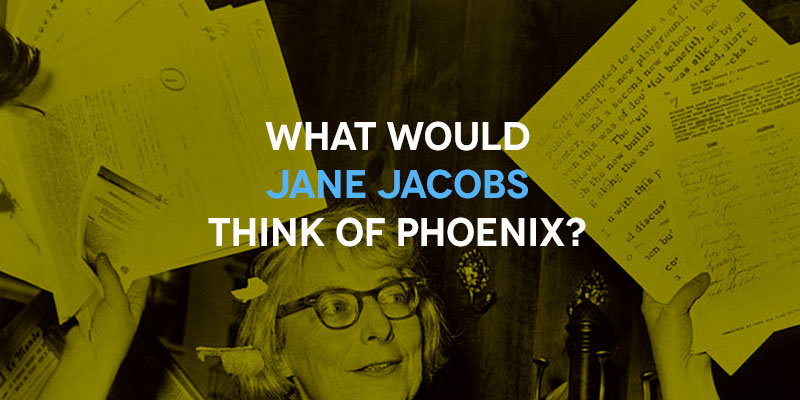 08 May What Would Jane Jacobs Think About Phoenix?

This month marks what would have been the 100th birthday of Jane Jacobs, the urban activist and writer who wrote about community-based approaches to city planning. She valued local residents having input in their city’s design, the importance of density, and creating pedestrian friendly streets. In celebration, we are co-hosting Phoenix’s annual Jane’s Walk through downtown Phoenix. This year, the walk will highlight the new and old residential areas that make up our city.

As we started to plan this year’s Jane’s Walk, we talked about the four key elements that make a successful city, based on Jane’s observations:

Then, we began to wonder, “What Would Jane Jacobs do?” when it comes to Phoenix. As we debated with one another, we also wondered what other Phoenicians might think. So we asked!

Below are a few responses we received, and we hope you attend and share your own thoughts at (Re)Developing Phoenix – A Jane’s Walk 2016 on Wednesday, May 11th at 6:30pm. 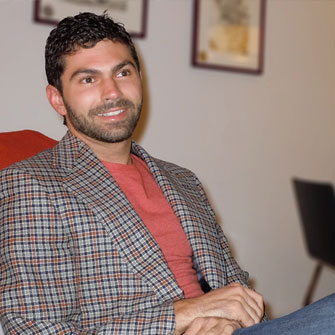 Co-founder This Could Be PHX

In Jane Jacobs’ book, The Death and Life of Great American Cities she asks us what comes to mind when we think of a city? She shares her own answer:

So what would Jane think of the streets of Downtown Phoenix? She would ask:

Then there are those aspects of a city that move beyond the street:

I pose these questions — rather than presuming what Jane would think about Downtown Phoenix — because Phoenix has substantial work to do before it finds itself as one of the places that Jane describes in her book. To be sure, Phoenix is making significant progress. But if Phoenix wants to distinguish itself as more than another average auto-dependent city of America (which Jane would likely lump it into), Phoenix will need to work hard, learning from many of the principles that Jane wrote about in her book. This will take devotion from not only the government, but from the community, from the people that live here, the people that work here, and the people that play here.

Cities have the capability of providing something for everybody, only because, and only when, they are created by everybody. 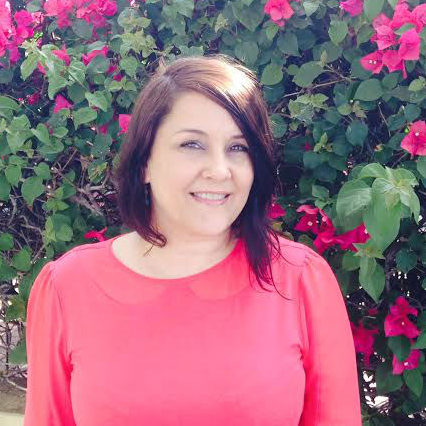 It’s no surprise that Jane Jacobs conducted most of her community organizing tasks by bike but, at the time, there were no modern bicycle infrastructure projects like those we’re advocating for today. However, there’s no mistaking that her views on cars, ‘eyes on the streets,’ and mobility have paved the way for today’s bike lanes and she’s always a source of inspiration.

Upon visiting present-day Phoenix, Jane Jacobs would be quite horrified at just how car-centric our city still is and would certainly be championing for bikes as a form of transportation, most-likely becoming our biggest voice. She’d be appalled by streets with wide, multiple-lanes that encourage speeding and by those with reverse lanes. She’d be angered by bike lanes that end abruptly and by sharrows that appear to be meaningless.

But, at the same time, I think she’d be quite pleased with all of the advocating that’s happening here for bike lanes and complete streets. I’m also pretty sure that she’d get a kick out of the fact that something called a “Jane’s Walk” exists and that we’ve even started calling the new bike lanes on Virginia Avenue the “Janes.”

...A heart is not a disembodied thing that you just set down arbitrarily like choosing a shopping center site. It has to have an anatomy that runs into the neighborhood…

Generally, using her scientific mind, the notable and late urbanist, Jane Jacobs, would observe city elements across the Phoenix Metro region to the downtown neighborhoods, down to the streets and buildings. She would note their ability, or lack thereof, in creating social connections and promoting physical activity through utility, safety, comfort, and curiosity. Specifically, here are just four things Jane Jacobs might have done had she lived here.

First, despite being ashamed of the existing freeway loop systems already established in Phoenix, she would not lament the 400 homes in Ahwatukee lost to the Loop 202 South Mountain Freeway being built to “connect” valley residents and “relieve” congestion, as there exist no real social networks there. However, she would still critically question the utility of the freeway and how the $1.75 billion could be better invested.

Second, she would encourage the Roosevelt Row CDC to create a community land trust in order to help maintain the local, cultural identity of Downtown Phoenix and its long standing affordability for its residents. This affordability would maintain the living opportunities for diverse groups of millennials and baby boomers, which in turn would fuel our downtown economies through their own skill sets and lifestyle demands.

Third, Jane would challenge creative developers to reintroduce the streetcar to the Garfield neighborhood, and rehabilitate downtown buildings that wouldn’t otherwise meet criteria for being historic and therefore important, so that they could house residents and businesses.

And finally, Jane would urge our planners and architects to create humane public spaces that would get us to get out and walk.

For more details about the event, please use the following link to the Facebook event.

Want to read more about Jane Jacobs? Below are a few links that can give you more info, or your can read her book, The Death and Life of Great American Cities.

What Would Jane Jacobs Do? Why that question remains so vital today

The Jane Jacobs Century On the occasion of what would have been her 100th birthday, a look back at just how and why Jacobs’ insights on cities have proved so enduring.

Chelsea is a pilates and dance instructor in Phoenix and a resident of Downtown Phoenix. She also helps coordinates events for This Could Be PHX and is a volunteer with Roosevelt Row.