A few weeks ago, we asked for your opinions on our Facebook page: What’s the worst thing about parking in Downtown Phoenix? You gave us various different responses, and were extremely helpful in understanding the community’s perception of what it’s like to park in Downtown Phoenix.

Let’s face it: Parking is a touchy subject that lies at the center of a clash of lifestyles. It’s a complex issue, and we get that. As part of our exploration into the topic of parking, we’ll attempt to understand and explain some of its many facets in future blog posts. We want to do this thoroughly and factually so that we (and hopefully you!) can fully understand the problems our city is facing.

Here are some of the things we most commonly hear about Phoenix parking:

“Parking should be free.”

While it can be frustrating to have to pay in Downtown when most places in Phoenix are free, there’s actually a very good reason to charge for parking, especially in urban centers. According to Jeff Speck’s book Walkable City: How Downtown Can Save America, One Step at a Time, the ideal meter pricing is one that ensures an 80-85 percent occupancy of parking spaces, or about one to two free spots per street. Too low a rate, especially in front of businesses, encourages people to park for greater amounts of time, creating stagnation. Too high a rate and parking spots will sit empty. Businesses rely on turnover to allow new customers room to park.

It’s also important to remember that, in actuality, all parking costs money — even “free” suburban parking lots. The difference can be found in where those costs are covered. You may directly see the costs of parking when you park at a meter or in a parking garage, but when you purchase items at a retail store with “free” parking, a portion of the price goes to pay for parking there. It’s similar to renting an apartment where your electricity is included in the rent. It may feel like a bonus to not have to pay for electricity, but your rents are actually higher as a result. Some people don’t like this system because they end up paying for a set amount of electricity even if they use less. The same burden is passed on to consumers when they shop at a place with “free” parking, whether they drove there or not.

Meter hours of operation have a similar goal to that of meter pricing: increasing turnover. In August 2014, the City of Phoenix extended meter hours from 5 p.m. to 10 p.m., a decision that was met with large public dissatisfaction. But, that decision gave businesses five more hours each day for customers to cycle in and out of those spots. Before the extension it was not uncommon to see cars park at a meter at 5 p.m., right as the machines shut off, and they would still be parked in the same spot the next morning. The longer meter hours increase the chance of finding a place to park for those five extra hours.

“There shouldn’t be time limits on meters at all.”

In some areas of town, this might be true. Hours and pricing should be tailored to the demand for parking in that particular area, and it takes trial and error to determine the ideal parameters. But according to Ben Carpenter with the City of Phoenix Street Transportation Department, the time limits and prices currently in place generally work to achieve the desired 80-85% occupancy. One exception is the area surrounding the ASU Downtown campus, where time limits were extended from two hours to six hours as a way to accommodate students who need to park for multiple classes. 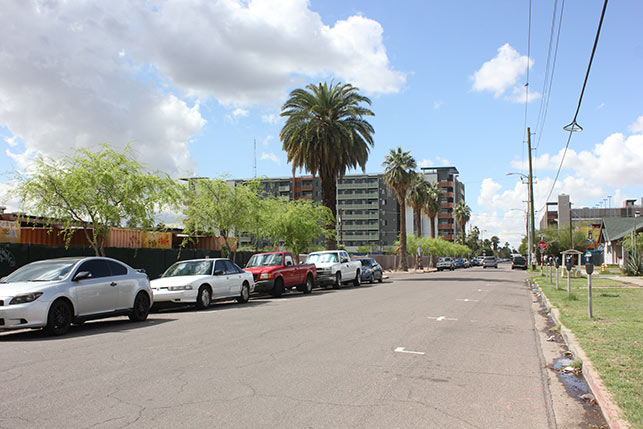 Garfield Street, facing west. The north side of the street has meters. The south side does not.

Main takeaway: Time limits on meters work in specific areas, but not everywhere.

“We should replace traffic lanes with more on-street parking to encourage business.”

Many of Phoenix’s streets are particularly wide and could be narrowed considerably with room still left for traffic. Van Buren, Washington, Jefferson, and Fourth streets, along with Central and First avenues, could each sacrifice at least one lane of traffic for the sake of on-street parking, and would likely even have room left over for protected bike lanes.

“Parking lots should be paved with something that puts off less heat and/or be covered in solar panels.”

We’ve written before about the harmful effects of a suburban lifestyle — including vast, sprawling parking lots — on the environment. Paving with an alternative to asphalt that is less heat-absorbent, like the green parking lot that used to be between First and Second streets, next to the ASU campus, is one very small way to offset surface parking’s impact, but it is still not a solution to the larger problem that is Phoenix’s oversaturation of surface lots.

(The green lot has since been torn out to make room for ASU’s new law school, so unfortunately, not even that example exists anymore.)

More than 80 percent of Phoenix parking is surface parking. Image via ParkMe.

Main takeaway: Heat-friendly pavement does not fix the problem of too much surface parking.

“The inconsistent costs between some lots and garages make it difficult to know where to park.”

Though curbside parking is not always available, there is no lack of garages and surface lots, each owned by a different company and each charging a different rate. Factor in event pricing, and sometimes the rate isn’t even consistent for the same garage on different days. It all comes down to demand — the more people who need to park, the more a facility will charge. Several of the companies that manage parking facilities downtown have websites that list hours and monthly rates, with a phone number to call for daily pricing.

Main takeaway; Parking is a commodity just like everything else, and is subject to fluctuations in price as demand rises and falls.

“Garages should be open for public use after business hours.”

Does it make sense for a multi-level parking garage to sit vacant for hours on end as cars circle the block over and over looking for parking? Not really. To that end, Phoenix City Council will soon vote on whether to approve the creation of a comprehensive downtown parking database cataloguing available spaces. Though the database is primarily intended to serve as a resource for businesses looking to occupy buildings that don’t meet current parking requirements,  it would also likely help drivers simply looking for a place to park for the day.

Main takeaway: Parking should be utilized to its full extent. No garage or surface lot should be fully vacant as a result of restricted use.

“There should be more bike parking near building entrances.”

We couldn’t agree more that Phoenix needs an improved bicycle infrastructure. We would love to see designated bike lanes being built into every street. But let’s start with bike parking. Some of the local businesses Downtown have at least one bike rack, but others sometimes have none, and there’s not always something solid enough to lock a bike to. Though businesses receive a tax incentive per city code for providing bike parking, it currently is not a requirement. And though improvements to bicycle facilities are listed in the City of Phoenix Complete Streets Policy, bike parking specifically should be stressed as a greater priority, if not a requirement.

These are some of the things we most commonly hear about Phoenix parking. It is by no means a comprehensive list of issues, but rather a synopsis of the conversation surrounding parking in Downtown Phoenix. We tried to address these concerns objectively and support them with research, but we would love your input. Comment below, or fill out our Get Involved form.