Contaminated Green: Why Sustainability Isn't What You Think it Is
3968
post-template-default,single,single-post,postid-3968,single-format-standard,bridge-core-2.9.6,qode-page-transition-enabled,ajax_leftright,page_not_loaded,,qode-theme-ver-28.0,qode-theme-bridge,disabled_footer_bottom,qode_header_in_grid,wpb-js-composer js-comp-ver-6.7.0,vc_responsive

Contaminated Green: Why Sustainability Isn’t What You Think it Is

07 Jul Contaminated Green: Why Sustainability Isn’t What You Think it Is

Nowadays, more and more people are doing their part to be ‘green.’ People all over the country are greening their homes with solar panels, solar water heaters, trash compactors, low water use plumbing fixtures, energy efficient light bulbs and mechanical units. The hybrid car is selling like hot cakes and the all-electric car is gaining in popularity as well. Governments and other organizations are beginning to require that all new buildings are built to LEED standards, with each building aiming to be more sustainable and ecologically friendly. Together, each of these tactics plays a huge role in transforming the way we have been living into a more eco-friendly way of life – or so we believe.

In reality, true sustainability has been contaminated by companies, governments and other organizations who want us to believe that we are being green. By creating eco-friendly products, promoting green technologies, eco vacations, etc. – we’ve bought into the idea that sustainability is just another thing to obtain. But it’s not a gadget or technology – it’s a context.  Sustainability is not a micro phenomenon applied to individual components, it is a network of deeply interdependent relationships, a way of living that goes beyond a product or service you can purchase.

Companies aren’t the only ones to be blamed. Our contentment for our current way of living has blinded us from the truly worldwide crisis that is underway; the impending shortage of our most valued and depended on fossil fuel – oil. A first glance might not reveal how oil dependent our country is, because we rarely think of oil consumption beyond the gasoline used to fuel our daily drives. But the use of oil is woven into nearly every element of our life.

[quote]Virtually all [we] own was created on machines that were powered by oil, coal, or natural gas, or was delivered to [us] over a transportation network fueled mainly by oil, or was made from components that were synthesized from oil, or was grown with the help of chemicals manufactured from oil and natural gas. – David Owen, Green Metropolis[/quote]

The consumption of oil is so woven into the fabric of our existence that we can no longer live without it, at least not without experiencing drastic changes to our lifestyle. Our entire way of life was built by the oil industry and it has become an indispensable part of it. Still, we know that changes need to be made. But what comes first? Most of us start small, replacing things that are the easiest to replace, are the least impactful on our way of life, and the most inexpensive. So, to be ‘green’ we do the following: 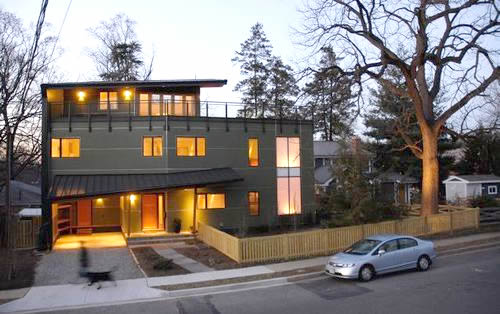 Unfortunately, all these things are done in a half-hearted and half-educated attempt to be green….

We are told by car companies that buying fuel efficient vehicles is how to be green.

We are told by the electric companies that adding solar panels to your home is how to be green.

We are told by the U.S. Green Building Council that building LEED certified buildings is how to be green.

And we buy a plethora of ‘sustainable’ products because we are told that is how to be green.

Green has come to stand for everything and nothing.

[quote]Hundred-thousand-dollar kitchen renovations are described as sustainable if the doors of the new cabinets are veneered with bamboo; concept cars are called sustainable if their seats are made with soy-based foam. – David Owen, Green Metropolis[/quote]

The True Shade of Green

Contrary to popular belief, there are only three significant elements to sustainability:

If these three things are done, we will drastically reduce our dependence on oil and become truly sustainable. For the millions of people living in cities, this simply means continuing to live the way they have already been living.

If you live in New York City, start calling yourself a sustainability expert because there is no other place in America that is more sustainable. New York’s green-house emissions are so low that for the rest of the country to catch up to them “it would require a national reduction of 71 percent.” (Owen, p.43) The reason New York is so sustainable is not because everyone drives a hybrid or electric car, or has solar panels and trash compactors, or lives in LEED certified buildings. No. The reason is because New Yorker’s live smaller, closer together and they drive less. That is what makes them sustainable – living in the most efficient city in America.

Cities have the smallest ecological footprint which means that less land is destroyed in their construction, fewer infrastructures are needed for them to run, and less driving is required to navigate through them. Driving less is the greatest contributor to sustainability and there is no other place that makes that more possible than the city, where proximity can eliminate the need for vehicular transportation and substitutes it with more ecologically healthier modes such as rail, streetcar, bus and bikes.

Admittedly, it is extremely difficult to conceptualize the magnitude of our oil consumption and to calculate how much oil even remains buried within the earth. Is it unlimited? Surely it isn’t. But if we look at how much oil the world is currently using, it’s evident that an oil shortage is bound to come. That daily consumption number is 3.5 billion gallons per day! (Owen, p.63) The real question isn’t when will we run out of oil, but how have we not run out already?

[quote]Approximately two-thirds of the oil consumed in the United States and Canada is used for transportation, mainly automobiles.– David Owen, Green Metropolis[/quote]

Switching to hybrid and electric vehicles, though, is not the solution to the oil shortage or to sustainability, especially if it is accompanied by increases in driving, which has statistically been the outcome. For one, a switch to electric vehicles would mean a switch to the electricity grid, requiring staggering increases in electric generation capacity. The energy for this increase will undoubtedly come from oil.

Sprawl and Sustainability Don’t Go Together

Beyond driving’s immediate impacts of air pollution and oil consumption is its indirect impact; driving has enabled “the single largest agent of resource depletion, habitat destruction, climate change and species extinction” – sprawl. (Register, p.141) The single family home and the infrastructure it has created is the antithesis to sustainability, and it is here where we can utilize the next two aspects of true sustainability to alleviate our impact on the environment; living smaller and living closer. 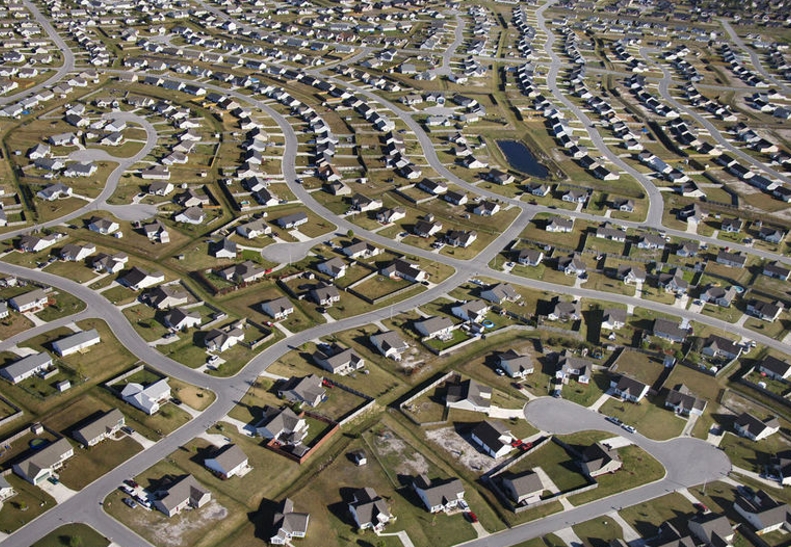 Miles upon miles of single family homes, single story buildings, strip malls, and parking lots have taken over the American landscape and, without a second thought given to it, have become the dominant way of life for millions of people. Habitats are being destroyed, animals are being pushed to extinction and temperatures are rising as a result of the suburban model of living. Unfortunately, our love for nature probably won’t be what motivates people to cease pushing the suburban boundaries outward; it will most likely be the increased cost of oil that changes our priorities.

[quote]Nothing motivates people to change their lives like fiscal incentives – and these incentives won’t be passive… They will eat away at exurbians’ disposable incomes until these people become convinced, household by household, that energy’s salad days aren’t returning. Only then will they dump their tract house…and head in toward the central city, where the jobs will be, where energy efficiencies can be fully leveraged.” – Christopher Steiner, $20 Per Gallon[/quote]

The cost of driving miles upon miles to partake in each facet of life will eventually become undesirable; indeed it already is for many Millenials. The cost of heating and cooling that 3,000 sf, 3-bedroom home will also lose its appeal, especially since more and more people are quantifying their happiness by the experiences they have rather than the possessions they own.

Putting the fiscal incentives aside for the moment, living smaller and living closer together is the most effective way of being green. Regardless of how many solar panels you have on your house, larger homes mean more energy, and in single family homes (unlike multi-family homes), the heating and cooling that eventually leaks out from your home will be released directly into the atmosphere rather than other apartments. Residents of New York City use “an average of 4,696 kilowatt-hours per household per year.” (Owen, p.17) Compare that to the average Dallas household which uses 16,116 kilowatts-hours per year.

Even a net zero (completely off the grid) single family home that is built outside of the city is less environmentally friendly than a non-net zero apartment in the city. Counterintuitive as it may sound, the reason lies in the fact that occupants of the net zero home still have to take part in society, and therefore they still have to drive everywhere they go to make those interactions. “Transportation energy use consistently tops household energy use, in some cases by more than 2.4 to 1.” (Speck, p.56) I am not saying that a net zero building is bad by any means, just that building a net zero single family home in the suburbs, as good-intentioned as it may be, is not how we become more sustainable.

What It All Comes Down To

Regardless of whether you want to be sustainable in an attempt to save the environment or for fiscal reasons, the cost of oil will continue to rise as the world’s reserves continue to be depleted.  Christopher Steiner, author of $20 Per Gallon: How the Inevitable Rise in the Price of Gasoline Will Change Our Lives for the Better writes an insightful narrative of just how increases in gasoline will affect the way we live. As prices rise we will experience budget cuts to school bus routes and sports programs. There will be increases in airline fares and changes in what we import and export. And it will bring with it a transition from the suburbs to the city.  Each rise in gas price brings its own set of changes. But there is good reason that this change will be for the better. Will it be a change that is forced upon us or will it be a conscious decision? Only you have the ability to make that choice.

I have mentioned but a few of the numerous reasons that the green trend is largely off-track, although well-intentioned. There are a number of books written by reputable authors (see resources below) that discuss this topic in greater length and the conclusions you will find all point to the same solution – living in the city is the most sustainable way of living, the most practical way to alleviate the oil crisis and the best chance we have at saving our earth and the species that inhabit it from extinction. Not to worry, though, This Could BE PHX has plenty of resources and stories for you to learn that cities are great places to live.

Interested in reading the resources I’ve cited here? These are four great books with valuable insight into sustainability:

$20 Per Gallon: How the Inevitable Rise in Gasoline Will Change Our Lives for the Better, Christopher Steiner

Walkable City: How Downtown Can Save America, One Step At A Time, Jeff Speck[/box]