How I Live & Work without a Car In Phoenix, Arizona
3609
post-template-default,single,single-post,postid-3609,single-format-standard,bridge-core-2.9.6,qode-page-transition-enabled,ajax_leftright,page_not_loaded,,qode-theme-ver-28.0,qode-theme-bridge,disabled_footer_bottom,qode_header_in_grid,wpb-js-composer js-comp-ver-6.7.0,vc_responsive

How I Live & Work Without a Car In Phoenix, Arizona

17 Mar How I Live & Work Without a Car In Phoenix, Arizona

You get what this post is about from the title. I don’t have a car. And I live and work in Phoenix. But let me be clear on one point… this isn’t a story about how I came to my senses that my gas guzzling SUV was evil and I could manage without one. I didn’t suddenly decide to truly embody my ‘urbanist’ vision and forego four wheels of transportation for my two legs (even though I wasn’t opposed to it). This also isn’t about not ever getting in a car or using a car. I do that too.

This is about not owning a car in Phoenix, and how I make it work in a city that isn’t typically known for a car-free life.

The fact of the matter is that I had a car. And it was stolen. All of a sudden, I was faced with a big decision I knew I was going to make at some point in the near future anyway…Car or no car?

Why I Chose No Car

Now, it might seem like that question is an odd one to come up after a situation like mine. Isn’t it a natural response to buy a replacement using insurance money since I didn’t really choose to get rid of it in the first place? Maybe it is. But that really wasn’t where my mind was at.

After living in London and traveling to tons of walkable cities, I saw what it was like to be able to walk or publically transport myself anywhere with ease. I have always felt happier when I lived in areas that allowed me to not be in my car every day. I sought out these types of areas in seemingly unfriendly pedestrian cities I’ve lived in like Phoenix and Los Angeles. It was even at the top of my mind to ‘phase out’ my car totally in 4 or 5 years time if I could build my life around that idea.

At the same time I was thinking all these things, there was a big logical part to me that said: [quote style=”default”]I have a paid off car, minimal gas costs, and a pretty sweet deal for a vehicle I use just 2-3 times a week to go on hikes, an occasional meeting, or pick up almond butter at Trader Joe’s (because it’s that good). Why would I rid myself of this convenient situation before I have to?”[/quote]Logic based on finances beat out over my idealized version of carving out a walkable life in Phoenix.

So when my car was stolen, the decision became easy. I mean…it was practically made for me after all. And honestly, I couldn’t be happier.

How I Get Around

I own a bike and use it every day. Everything within Downtown Phoenix is under a 10 minute ride. Plus, biking is fun. It’s social. It feels like you’re part of the fabric of the city rather than just observing it from behind the wheel.

This is one of my favorite modes of transportation. Good ol’ glutes and quads. Nothing is more than a 20 minute walk around Downtown Phoenix. I recently had my bike in the shop for some repairs, and I clocked in at least 3 miles of walking a day.

Car when I need it. 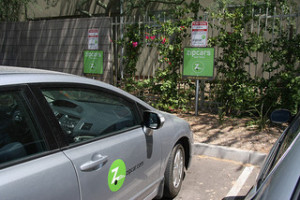 Zipcar is a great car sharing services where you pay to use a car by the hour. There are 5 available cars a 4 minute bike ride from my apartment. I own my own business so I do need to go to clients’ offices a few times a month. A large majority of my clients are on the light rail or up for meeting Downtown, but I do need to rent a Zipcar to get a little further afield. In February, I paid 120 deductible dollars for Zipcar rentals…oh did I mention that includes gas, insurance, and a total damage liability waiver? Lyft or Uber comes in handy when a chauffeur is the necessary choice.

One of the best things to happen to Phoenix, in my opinion. This is spurred so much business along the Central Corridor, and honestly it seems to have changed the whole culture of Downtown Phoenix, or at least given it more of an opportunity to create one. It provides people options to move around other than a car – and you can get a lot of places within its sphere.

Not Having a Car Changes Things

By not having a car, things really do change. Well – not things exactly…it’s was ME who had to change and get used to doing things differently. Here are a few things I’ve discovered:

I think my biggest takeaway that sums up the last five is this: Without a car, I’ve had to become really intentional. Since Phoenix is so spread out, it doesn’t lend itself to a car-less life. So I’ve had to make intentional decisions every day about where I’m going, what I’m doing, how I’m going to get there, and how much time I have to spend…much moreso than when I had a car. There is a ton of planning involved now. My car gave me the freedom to run around and have everything be so convenient. But in Phoenix, not having a car makes me intentionally choose how my day shapes up, where I spend my money, and how I spend my time without always defaulting to a car option every time. There’s a type of freedom in that, too. No it’s not the same freedom I had when I had a car…it’s a different type of freedom I’ve experienced since getting rid of a crutch I’ve relied on for so long. Maybe it’s just the freedom to make a lifestyle work I didn’t think was possible.

How This Can Work in Phoenix

Living car-less in Phoenix can only be possible if you live in a location that allows for it. That area for me is Downtown Phoenix, maybe one of the only places this is possible. I have access to bike routes, Zipcars, easy airport access, great areas for walking/biking, and the light rail.

Life sphere is the distance between where you work, live, play, eat, drink, socialize, exercise, etc. Most of my clients are within biking distance with the occasional need for a drive somewhere, all my friends live and play Downtown, my yoga studio is nearby, and I honestly don’t need to leave this area for much (except groceries, because we still don’t have a darn grocery store!).

I add this in because car-free can’t be for everyone, and by no means is my story of parable for everyone to ditch their cars. Many factors like commute, kids, family, etc come into play with why some people do need a car. At this time in my life, I work for myself and have chosen to live in an area that allows me not to have one. It might not always be this way, and I’m open to that fact. 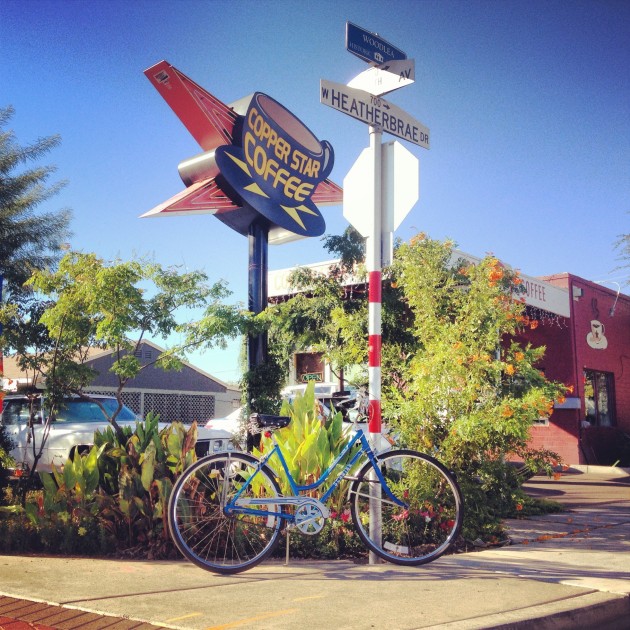 The majority of my transportation is via bike. I do understand, however, that it’s not possible for everyone.

I do think car-less in Phoenix can be a choice if the right factors come together. I chose years ago to start my own business so I could live a lifestyle that best suited me: one that was walkable, rooted in community, and connected to what’s happening around me. So my choices a long time ago led me to where I am now, without a car and completely content.

My car was found over two months later. The itemized damages were more than the worth of the car, so I got a chance to try out an idea I always had. I don’t have to worry about car maintenance and rising insurance costs. I help out the environment and I naturally have more and more exercise built into my day. Mainly, I’ve learned a lot.

My main takeaways: I’m happier without dealing with a car right now. Convenience is overrated. Driving is scary when you haven’t driven in a while. Buying a new car is expensive. There are options to get around outside of car ownership. I love exploring the city on foot and bike. Car-free is possible in Phoenix.

And last but not least, I hope I don’t die of heat stroke in the summer. At least that cool bike breeze will keep me happy and healthy, if not completely drenched in sweat.

Quinn Whissen is freelance graphic designer and marketing consultant in Downtown Phoenix. She fell in love with the area and all the potential it has to be a thriving urban center. Quinn has a passion for design, small business, yoga, and art mentorship.