Posted at 08:00h in My Phoenix Story by Courtney Craig 0 Comments
Share

“Ew” was one of the first words I heard when I told people I was moving to Downtown Phoenix. Yep, seriously. They would ask, “Is it safe?” or “What’s even down there?” My parents were even guilty of this vision of Downtown, two people who have lived in the Valley since the 1970s, and worked/played in Uptown Phoenix in its early booming days.

As unnerving as those questions sound now, at the time I really couldn’t blame them. Downtown Phoenix was just starting to be “revitalized” after years of what seemed like dormancy. It didn’t help that I grew up in Scottsdale and graduated from ASU – a school full of transplants who (7 years ago) would say, “Phoenix has a Downtown?”  Yep – that comment also seriously happened. Outside of sports arenas and concert venues, most of the people I knew seemed to see Downtown Phoenix as a barren wasteland.

During my time at ASU I changed my major three times – I was never really a gal with a plan. I just kind of went with things as they came my way. Luckily, by the time I was a senior I found something I could stick with – video production.  My first real introduction to Downtown Phoenix happened when I got an internship at a video production house near Roosevelt Street.

It was one of the coolest offices I’d ever seen.  At lunch I’d hear people talk about First Fridays, the different art galleries, local bands, etc. After a few weeks, I started to realize there was a big sense of community Downtown – something I’d never really experienced in North Scottsdale. At the time, some classmates and I desperately needed a topic for a student documentary and I thought it’d be great to tell the story of First Fridays. That’s when I was introduced to two people who were greatly responsible for that sense of “community” I felt: Greg Esser and Cindy Dach of Roosevelt Row Community Development Corporation. After 10 minutes with Greg, we realized our story was not in the evolution of First Fridays, but in the rapid revitalization of Downtown that was happening right under our nose.

With Greg, we stood in front of a big map of Downtown Phoenix as he pointed out empty lots, unused buildings, and told us stories of the surrounding historic homes. Then, he told us their plans for Roosevelt Row. He went into detail about the importance of live/work spaces, the art walk, and “filling in the spaces.”  Born and raised in the suburbs, I never even heard of a live/work space. He told us they studied other urban cities like Portland, Chicago, Austin, and Denver, and the importance of making Downtown Phoenix “walkable.”  There was a moment in there where I thought, “Yeah, why aren’t we like those cities? Who is in charge of all this?!”  That’s when I realized, derrr, it’s the community that will ultimately make plans like this successful.

After a few days in the editing room replaying interviews with Greg, the owners of Welcome Diner, Carly’s, Tammie Coe, and some Phoenix policeman, I knew Downtown Phoenix was far from “ew” and I wanted to be there to watch it grow. But I still had my senior year to finish and a couple of months planned in Europe for my ‘I’m not ready to get a real job’ phase, so Downtown Phoenix went to the back of my mind for awhile.

After graduation and my trip to Europe, it was time for me to make a plan for my life. I didn’t know what I wanted to do or where I wanted to live, but I did know that I did not want to stay in North Scottsdale or Tempe. I knew I needed a change of scenery and wanted something different for myself, especially after getting a taste of the thriving, super urban cities of Europe. About the same time, my step-brother Sean moved to Arizona from Illinois and really wanted to get into the art scene. I told him Downtown Phoenix could be a great place to start, knowing about First Fridays and Roosevelt Row. He needed a roommate, and that’s when I decided on Downtown Phoenix, thinking it was as close as I could get to that eclectic and communal feel those European cities had. So, we set ourselves up in between Roosevelt and Portland streets near the light rail.

After a couple of safety lectures from my parents, and a couple “gifts” of mace later, I knew all the skepticism was baloney and that I made the right choice. As an Arizona native who grew up in the hot, hot suburbs where we fried eggs and grasshoppers (yes, grasshoppers!) on the empty sidewalks, I was not used to people being out and about in their neighborhoods, actually walking around outside talking to … (get this) other people. I lived on one of the quaintest streets I’d ever seen in my life. Within walking distance there were historic red brick houses, green parks, coffee shops, salons, restaurants, and a dry cleaner. Was this real life?  My brother Sean seemed to be just as content; He was already networking with artists and getting gigs. Downtown Phoenix was proving to be a place far better than any European town. It was a place we had the opportunity to change, to watch grow. It was also a place we could grow our careers.

NOW, AND WHY I LOVE IT HERE

Flash forward to now – where I am suddenly a part of the urban community I always wished for.

I see the same people walking to, from, and inside local Downtown businesses every day.  Many of those people are my friends, and some are becoming my family. We ride the light rail or bike to the many Downtown restaurants, concerts, and events on the weekends. We go to bars inside old historic houses before stumbling (safely) home down the street. We can plant in community gardens, we can shop at a large, twice weekly farmer’s market, we will soon be able to conveniently rent bikes from bike shares on street corners, and we can find dozens of things to do without having to get into our cars. The convenience of living Downtown is something we all know and love, something most other Arizona cities do not have in the same way. I also know I am safer Downtown than in most other areas of the Valley.

Downtown Phoenix has come a long way since I moved here 6 years ago, and I know it will continue to evolve into one of the greatest Downtown areas in the U.S. by the time I have a family. 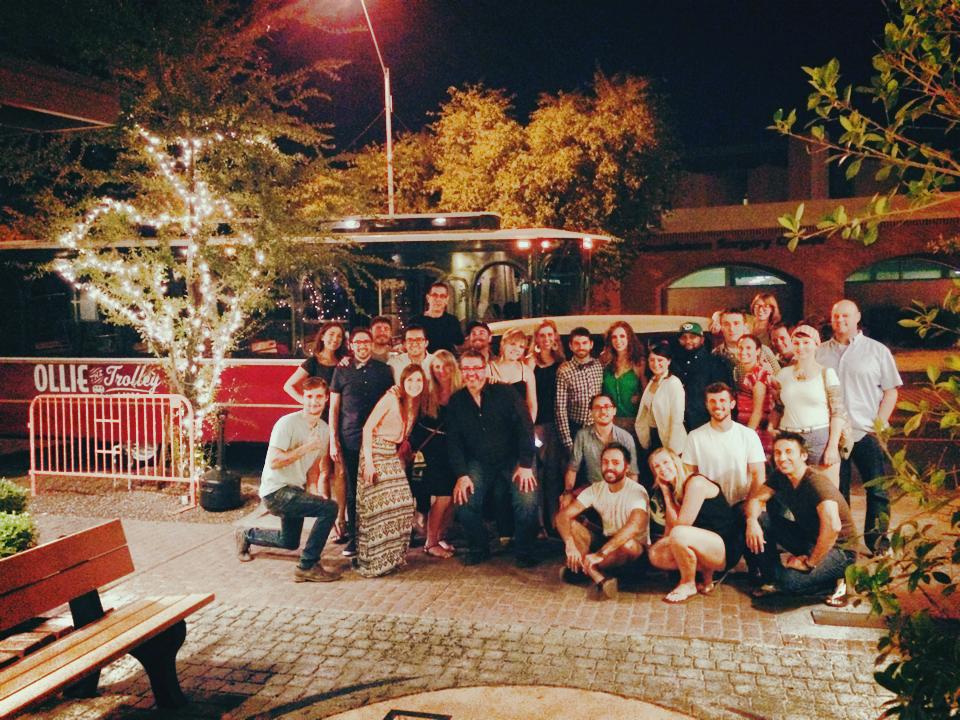 Courtney is an Arizona native who lives in the Coronado Historic neighborhood in downtown Phoenix with her fiancé Jon and their cat Chloe. She works for one of the only national television shows produced in Phoenix, RightThisMinute.