How Living in Downtown Phoenix Saves Me Money
4485
post-template-default,single,single-post,postid-4485,single-format-standard,bridge-core-2.4.3,ajax_leftright,page_not_loaded,,qode-child-theme-ver-1.0.0,qode-theme-ver-22.8,qode-theme-bridge,disabled_footer_bottom,qode_header_in_grid,wpb-js-composer js-comp-ver-6.3.0,vc_responsive

How Living in Downtown Phoenix Saves Me Money

28 Jan How Living in Downtown Phoenix Saves Me Money

“Living Downtown” and “saved me money” are two phrases that don’t normally go together. Up until a year ago I would have agreed, but then I realized that living in Downtown Phoenix could actually be a great way to fill my pockets with some spare change, and then some.

I’ve heard a lot of people talk about moving out of the city in order to cut costs or not choosing to move Downtown because of the higher costs of urban living. It’s true; many places in the city are expensive to live in, especially if you are expecting to live in a 1,500 sf – 2,000 sf apartment or condo with outrageous HOA fees. So I am sure you must be asking; how in the world does living in Downtown Phoenix save you money? The answer: transportation.

Do I Really Need My Four Wheels?

You see, for about six years I lived in Downtown Phoenix without being able to claim that my choice of location was adding to my savings account. But I always saw the potential for it. I just needed to break 29 years of habit. Like many people, I grew up in the car-dependent suburbs. If you didn’t have a car, you didn’t have a life.

Basically I was only driving to the grocery store and to other random places. I was beginning to realize that paying $400 per month ($250 car payment, $100 insurance payment and $50 in gas) to drive to the grocery store once a week was extremely wasteful. So after years of talking about selling my car, I finally took the plunge.

The Hard Numbers: What I Saved

It’s been a year since I sold my car and in that time I’ve saved myself nearly $5,000, a sum of money that has allowed me to take TWO trips to Europe! Don’t get me wrong, I still have transportation costs, but they are much lower. I bike to almost all of my destinations and take the light rail occasionally which costs $4 per day. I also still have to drive to the grocery store (when it is not cool enough outside to ride) which costs about $12 per week for an hour of ZipCar time. But all combined, I only spend about $60 per month on transportation. That’s a week’s worth of gas for many suburban dwellers.

Now, I didn’t just sell my car without doing some research first. I wanted to make sure that it was the right decision. Anyone should do the same if they’re considering this type of change. In Douglass E. Morris’ book It’s a Sprawl World After All, he claims that the average suburban American family could save $560,000 on automobile costs over 30 years. Now that’s a lot of money! So let’s make sure that pencils out. Here is how he came up with the cost, which is based on two cars traded in every seven years:

Obviously not everyone will find themselves fitting the criteria used above and many workplaces still aren’t located within the city. Yet the main point remains the same: a lot of money is being spent by Americans on driving. And unlike a home, which will appreciate in value in a good economy, cars only depreciate.

So if you are debating between spending $150,000 on a place in the suburbs instead of $250,000 on a place in the city, it is important to remember that the $100,000 you save will likely just go into transportation. On the other hand you will make money on your home, given we don’t encounter another major recession. You’ll most likely be more fit and environmentally friendly, too, which might just save you in future health related costs. If you are interested in an even deeper investigation of this matter, a recent study done on housing prices in Toronto describes four case studies in which each family looked at housing downtown and in the surrounding suburbs. To sum up the findings in one sentence; downtown homes costed approximately 100-200k more than the suburban homes of similar sizes, but once transportation costs were factored in monthly costs were actually 1-2k more than the downtown homes.

The Cost of Public Transportation

Taking public transportation has had a negative stigma around it in the past but the more it is used by the public the better it becomes and the more that stigma is broken down. Yes you may encounter someone undesirable but you may just meet the love of your life. Yes it may take longer to get to your destination, but you can’t read a book or do work on your laptop while you’re stuck in traffic. 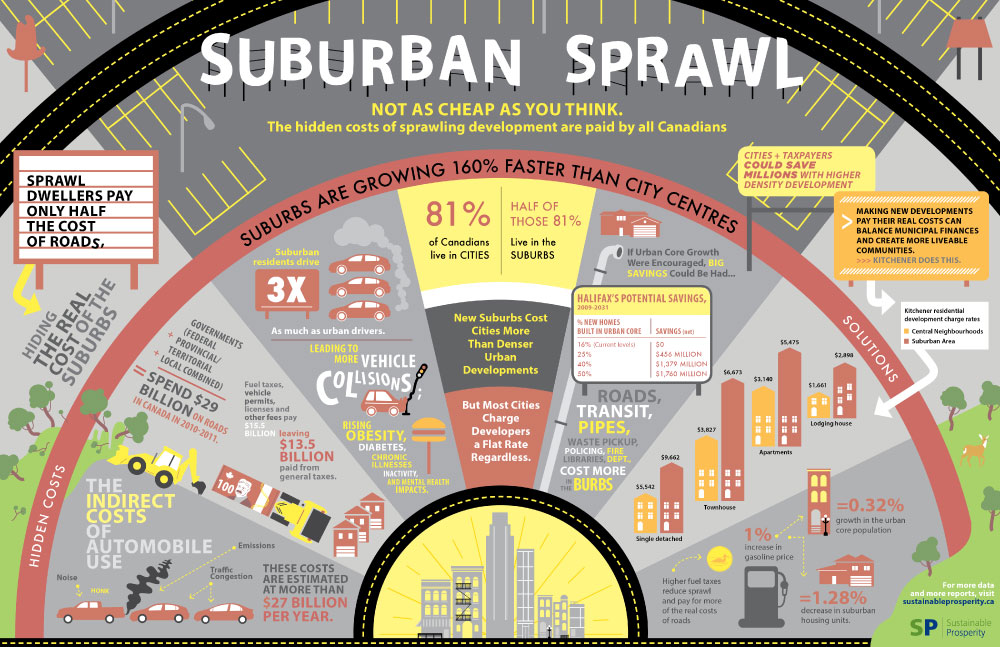 For many people on the fence about going car-free, the decision to keep their car may often come down to things such as job location, trips, family, etc. If you simply can’t get to your job via public transportation, then going car-free just can’t be for you. If the reason you choose not to go car-free is because you often go on road trips or visit family in the burbs, it might be good to run some numbers comparing the cost of your car now (and don’t forget the gas, insurance, maintenance, etc.) to the costs of renting a car. This year I’ve taken a few road trips as well as visited family and I rented a car each time. The cost did not come close to that of owning a car.

Still, everyone’s circumstances are different and yours just might not allow for a car-free lifestyle. That’s ok, though. It is possible to be car-lite, cutting down on the costs of gas and ultimately maintenance. You may even be able to have a single car per family rather than two or just opt to not drive on the weekend and only bike or use public transit. Living in the city will help you go car-lite through proximity to both amenities and necessities.

Another Way to Cut Costs

There is another way to save money by living downtown, and that is to live smaller. Paul Loomans recently wrote a blog about how he lives in a 160 sf space. That is quite radical and clearly doesn’t meet the comfort levels of everyone, but you don’t have to be that drastic. I lived in 500 sf of space for 4 years and I liked to say I had every room in an average 1 bedroom place, all in a single room.

I could fit a bed, couch, coffee table, tv stand, 4 person table and of course I had a kitchen, bathroom and walk-in closet. The greatest thing about it was the efficiency. My heating or cooling bill never was over $60 a month. I couldn’t spend lots of money on “stuff” because, well, I only had limited space for “stuff.” Another great thing about a small space that Paul talked about was that the fewer amenities you have at your place, the more you go out and interact with your community. Now this may result in spending more money, depending on how you choose to make those interactions (i.e. a coffee shop, restaurant, bar, cultural event, sporting event, etc.), but for me those experiences are worth much more than the “stuff” we acquire when we live in a larger place.

What it really comes down to is I didn’t move Downtown to save money. I moved here because Downtown possessed something that I never got living in the suburbs; community, culture, arts, entertainment, architecture, walkability, bikeability, proximity, connectivity and more. All of these elements which can be found in cities, to me, are worth a higher cost of living. That’s not even where I cut costs; it’s where I gain value. As it turns out, though, it would cost me less than if I lived outside of Downtown. And that is news I think worthy of sharing.